I shall be bold and announce that this year, for the first time ever, I will agree with the Man Booker judges when, on October 13, they decide which book wins the annual literary prize for novels published in English. I am just that sure, and not only because everyone is betting on the same favorite. Frontrunners often lose. But I’m declaring the American Pharoah effect in honor of the horse that brought home the Triple Crown for the first time in 37 years. That seems an omen for frontrunners. I dare the committee to prove me wrong and pick anything other than A Little Life by Hanya Yanagihara.

Although A Little Life has a reputation for making grown men weep, it’s a story built on the warm friendships among four men
who met in college. From the start, Yanagihara’s unadorned prose transmits the inevitability of tragedy, with the gradual 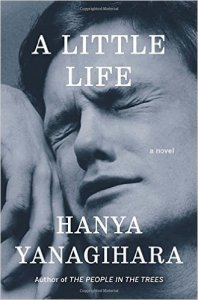 revelation of the horror-filled childhood of one character, Jude St. Francis. Yanagihara’s characters are, as adults, people of privilege and remarkable success — there’s an Oscar-winning movie star, a powerful attorney, a famous architect, and a celebrated artist. But that bit of unreality recedes in the face of Jude’s suffering, as he tries to manage a life plagued by childhood demons.

Why I’m right: It’s reported to be a 2-to-1 favorite, and who doesn’t like a good cry? The characters are likeable, the relationships deep and worth exploring, and the plot moving, unflagging and unforgettable.

Why I might be wrong: It’s a fairy tale of friendship among people who have it all.

Another pairing of tragedy and the bonds between males, in this case boys, is my No. 2 pick for the prize, The Fishermen, a first novel by Nigerian author Chigozie Obioma. Four sons form a tightknit tribe who do everything together. The story, told from the perfectly tuned perspective of 9-year-old Benjamin, feels like a slow motion tumble, where every possible rescue comes into sharp focus

just as it slips beyond reach. The brothers are warned to stay away from the nearby river, but when their father has to leave his family behind to work 1,000 kilometers away, the river calls. They go fishing, and it’s fun. They declare themselves “The Fishermen,” even making up a song to accompany their labors. Returning from a fishing outing one day, the boys encounter the local madman who prophesies the death of the oldest boy. “Ikena, you will swim in a river of red but shall never rise from it again,” he shouts. The boy will be killed, the man says, by a fisherman. The malignant words burrow into the 14-year-old’s thoughts and take over. Ikenna tries to protect himself from the prophecy, and by doing so, unravels all. (304 pages; Little, Brown and Company; $26)

Why I might be wrong and this could win: It has the power of a tragedy and the vividness of a boy’s voice.

A Brief History of Seven Killings, by Jamaican author Marlon James, is No. 3 on my Man Booker list. To read it is to be

bombarded with violence, assaulted by a horde of voices, and buried in stories—stories that left me desperately searching for a narrative. Several characters act as narrators—a dead politician, a CIA agent, an obnoxious Rolling Stone reporter, several Jamaican gangsters, young men transformed into coke-addled bloodthirsty thugs, and a woman caught in the storm when she shows up just as gang leader Josey Wales and company shoots The Singer. The book is based on events in Jamaican history, including the shooting of reggae star Bob Marley in 1976. It also incorporates the rise of a Jamaican gang that, by the 1980s, controlled the crack trade in New York and Miami. Reading it is a challenge. It’s exasperating and confusing, raw and violent, and overrun with wicked, empty people. It’s also smart, daring, and as things finally — mostly — come together, breathtaking.

Why I might be wrong and this could win: Few writers take such gambles. Fewer still can pull them off.

My No. 4 pick for the prize, The Year of the Runaways by British novelist Sunjeev Sahota, is about men living on the margins, and one woman, Narindar, whose act of compassion ruptures her tranquil life and destroys her faith. The men, Tochi, Randeep,

and Avtar, are illegal Indian migrants in Sheffield, England. They live in circumstances so desperate, friendships are too costly to keep. The men run the hopeless treadmill of underpaid, physically brutal or menial jobs, for employers who view them as interchangeable pieces, and sometimes, property. The litany of hardships is awful and riveting. Yet the book lacks a sense of intimacy for much of its length, and does not find its heart until its final chapters, when Narindar and Tochi, an “untouchable” whose family was brutally slaughtered in sectarian violence in India, are forced together by circumstances, an event that marks the turning point in both lives.

Why I might be wrong and this could win: Well-developed characters with wrenching stories make an almost political statement about what it means to be a migrant in the West.

I won’t lie. I have no idea what my No. 5 pick is about. In Satin Island, author Tom McCarthy, who was shortlisted for the Booker Prize in 2010 for his novel, C, is telling us something about modern life. He says many clever things, and explores several intriguing

obsessions — parachute accidents, oil spills—to no clear end. I’m so uncertain about all this, I’m going to tell you how the book ends: His character, U — and there’s really only one character — decides not to take the Staten Island Ferry. That’s it. Staten Island is —have you guessed it? — Satin Island. It came to U in a dream, appearing as a giant and beautiful trash incineration plant amid mountains of garbage, representing the true expression of our culture. I think. U makes this discovery while working as an in-house ethnologist for a big, anomalous company where he’s assigned to write, “The First and Last word of the Age,” as his contribution to the firm’s nebulous project of earth-shaking importance. And then other things happen. If I’ve given away too much, I apologize.

Why I might be wrong and this could win: Many, many people are much smarter than I am and may understand this. It offers all kinds of tidbits to think about, and some moments buzzing with insight.

Anne Tyler’s characters don’t change so much as dig themselves deeper in A Spool of Blue Thread, my No. 6 pick for the Man Booker. The story revolves around an unexpected homecoming by misfit son, Denny. Denny has skipped years of holiday

gatherings, blames his parents for most everything wrong in his life, and resents his siblings. No surprise that no one quite believes him when he announces he’s returned to help the folks, Red and Abby. Red recently suffered a heart attack, and Abby’s memory is on the fritz. The problem is, Denny’s brother Stem has already moved in. Family tensions bubble along until boiling over in a fistfight between the brothers. Tyler is a master at finding the unhappy underside of family life and portraying the loveable, or in Denny’s case, the unlovable, loser. Yet somehow these parental anxieties, sibling resentments and sly observations of both don’t add up to much. Tyler’s familiarity with family foibles feels just too familiar, and there’s not much new to say about the fact that Mom liked you best.

Why I might be wrong and this could win: Tyler is admired as a deft observer of the intricacies of the American family. More compelling to me, for the past two years, Man Booker judges have picked the book I liked least as the winner. They could do so again, American Pharoah be damned.

I'm a freelance writer who often writes about science and medicine. View all posts by jennilaidman